Paracelsus and the Elementals


How about a somewhat odd topic?  ELEMENTALS.  In our current Western Culture, we tend to think that all paranormal experiences or contacts are with residual energies from past events or the disembodied souls/spirits of the dead.  But, I've always been interested in older and more diverse theories describing beings or energies other than the dead.

I'm going to be borrowing from this wikipedia page.  Feel free to go read it, if you are interested:

The idea of elementals is often described in occult and alchemical writings originating during the European Renaissance.  An interesting fellow named Paracelsus wrote about them in the 16th century, and many writers and philosophers followed up on his theories with variations and extensions of their own.

Paracelsus is drawing on a number of much older traditions, but he is building something expanded and new upon the foundation that came before.

"The elements of earth, water, air, and fire, were classed as the fundamental building blocks of nature. This system prevailed in the Classical world and was highly influential in medieval natural philosophy...The homunculus is another example of a Paracelsian idea with roots in earlier alchemical, scientific, and folklore traditions."

"He noted that undines are similar to humans in size, while sylphs are rougher, coarser, longer, and stronger. Gnomes are short, while salamanders are long, narrow, and lean. The elementals are said to be able to move through their own elements as human beings move through air. Gnomes, for example, can move through rocks, walls, and soil. Sylphs are the closest to humans in his conception because they move through air like we do, while in fire they burn, in water they drown, and in earth, they get stuck. Paracelsus states that each one stays healthy in its particular "chaos," as he terms it, but dies in the others."

You can get more details from the article, or hunt down some of the sources cited by the article.

I suppose what interests me about this topic, is Ghost Vigil went on an investigation in southern Missouri some years ago, where a man living in the woods was plagued by what he described as "elementals" or "salamanders."  He used both terms, interchangeably.  And we had at least one other investigation back then, where elementals were blamed by our client for the paranormal experiences they were having.

For me, it is a reminder that we don't have a perfect (or even a good) understanding of all of the mechanisms at work in the paranormal field.  And cutting your learning and explorations short at "dead people" is selling yourself short.  There is more out there than we understand, or possibly even comprehend.
- March 26, 2020 No comments:

"Haunting in the Heartland"

This new Travel Channel series, "Haunting in the Heartland," is intriguing to me.  First, it focuses on the Heartland of the country, and I love stories like this set in small towns and rural areas.  Secondly, I don't know Steve Shippy, but perhaps he'll be fairly grounded and reasonable in his approach.  One can hope, and be optimistic.

A real paranormal investigation or consultation is NOT made for television. These things tend to be fairly long and uneventful.  So, shows such as this one feel a natural pressure to produce something one film that is compelling.  In some cases this means faking events, and in other cases it means using editing and narration to exaggerate everything to a fever pitch...though in the end, very little has happened.

I think there would be room in the market for a paranormal show that follows a very grounded group, as they logically examine legends, anecdotal experiences, and reported phenomenon.  But, to date, I'm not sure we've seen this happen yet.  Perhaps Steve Shippy will buck the curve.  :-)

Though this marketing copy from the article suggests my optimism might not be warranted:  "The alleged evil spirit at work in Merrill may be connected with another haunting. Shippy gets help from a clairvoyant during the episode to ward off the spirit."

Well, even if the show is a completely loopy over-hyped train-wreck, it might still be entertaining.  And really, what more can we ask from a television show than entertainment?

Narratives Formed by Events that Coincide 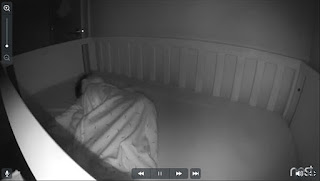 What is so difficult about the strange experiences people have is the human mind's innate ability (or inclination) to connect events or circumstances, that aren't necessarily connected.  I'm sure this is a basic survival instinct from our earliest days.  Event A happened, and Event B happened at nearly the same time, and Event B was really really bad, so in the future avoid both Event a and Event B.  Its the mechanism behind psychological conditioning.

When unexplained events coincide, and we start to connect them, we build a narrative that pulls all of the events together into one cohesive story.  And this narrative becomes very real to us, and we are usually willing to defend that narrative.

So, taking the basic facts of this example story, lets look more closely.  A family is living in a home that the extended family tells haunted stories about.  A family mythology has developed where the location is creepy, and "something" paranormal is there.  This is a common thing that happens in many families, and is most always based on anecdotal experiences.  This is condition A.

Their video tape shows an unexplained anomaly, where a strange lighter colored shape or band crosses across the screen.  Since this anomaly on the recording is unexplained, we can attribute a more mundane explanation to it (digital artifact, car lights crossing across window, etc.) or something much less mundane.  This is condition B.

Their child had a scratch on their face.  This is utterly normal.  Children scratch themselves all the time, either with their own fingernails or in a fall.  And they are so young, unless you see the scratch happen, it remains unexplained.  This is condition C.

Any one of these conditions taken on its own is not particularly interesting or compelling.  But, if you put the child in the creepy location (condition A), and an anomaly shows up on the camera (condition B), and then you notice a scratch on the childs face (condition C), suddenly a conclusion is reached that "a ghost has hurt our baby and we caught it on tape."

This narrative is so charged with emotion and fear, but seems like such a definitive conclusion to the people who have woven the narrative, that an outsider coming into the situation and trying to examine it logically will have a very difficult time of it.

The thing to keep in mind, is that events are happening constantly.  Millions of moments and events passing by you every day.  Various conditions come and go in your life.  Just because events and conditions coincide, it does not necessarily mean they are connected.

But, as an investigator you must respect the importance of the narrative to the family, and handle matters in a delicate fashion.  And you must also keep in mind, that just because these events are not necessarily connected...there is at least the possibility that they ARE CONNECTED. 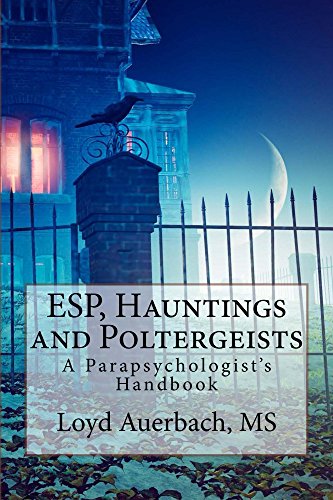 Loyd Auerbach is an excellent writer, and this book is (in my opinion) an excellent book for those wanting to learn more about the paranormal and Psi-Theory. What mechanisms are possibly at work behind our unexplainable perceptions? If the topic interest you, this is worth getting.

This book was written long before the modern television ghost-show craze.  It is based on a parapsychologist's perspective, rather than the perspective of someone trying to carry a multi-season television show.

You can buy new copies on Amazon or other online booksellers, or you can find a used copy most places where used books are sold.

Buy it on Amazon