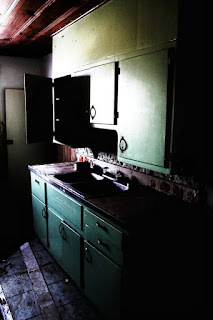 More recently I was contacted by an old friend who was experiencing similar phenomenon in a house where they were house-sitting. No one else had access to the home during times that cabinets and drawers that were closed would be opened. The phenomenon was never heard, but the discoveries of open cabinets and drawers were frequent, as well as other moved and stacked objects.

Obviously, one should consider mundane causes in these situations. Did a roommate or family members simply leave cabinets or drawers open? Is a cabinet catch broken and the cabinet hung in a way that allows it to work its way open with only the minimum environment vibrations or coaxing? Did you accidentally leave a cabinet or drawer open yourself?

But obviously the mundane begins to slip away when you hear drawers and cabinets opening and slamming themselves shut when you are alone in a locked house. But conceivably, one would want to check for open windows, drafts, and other non-paranormal possibilities. As well as 100% re-confirming that they were alone in the house at the time of the phenomenon.

Assuming for a moment that every mundane cause is eliminated and we have reason to believe the activity is inexplicable or paranormal in nature, what is the theoretical mechanism behind this activity? There is the possibility that an intelligent/conscious spirit has survived the death of his or her body, and the spirit in question is using psi powers in order to move the physical objects in question. In other words, an intelligent ghost is using telekinesis to create the activity. Cabinets swing on hinges and drawers often roll on small wheels and tracks, making them a large noticeable way to affect the physical world with minimal effort. It takes very little physical force to get most cabinets or drawers moving, suggesting that a being capable of moving objects with his or her mind would need to employ minimal mental effort. Minimal effort as compared to moving heavier objects not hung on pivot points or sitting on wheeled tracks. One could suggest that the intelligent spirit is attempting to get attention, express frustration, or communicate some other message in a way that gets the most bang for their buck.

We must also consider that if the activity is paranormal in nature, then this activity could be caused by a living being, either consciously or subconsciously using telekinesis to move the cabinets and drawers. For psi theory, there is very little difference between a living being using telekinesis to move a physical object, and a spirit that has survived the death of the physical body doing the same thing. We bring up the subconscious use of psi abilities, because so often when the living are the cause of paranormal activity they are doing so inadvertently. Traditional poltergeist activity is usually centered around a young person going through emotional turmoil, who subconsciously affects the world around them with psi abilities. Their emotional state boils over, causing them to subconsciously lash out at the world around them. Physical objects being thrown about or moved being one of the main results.

It is also worth noting that in the many varied mythologies and belief systems that have existed throughout the history of mankind, a ghost-centered approach is not universal. Unseen beings and forces that are decidedly not human, and have never been human, are attributed the ability to move physical objects in an unexplained way. Modern Western Culture tends to shoehorn all paranormal activity into the category of ghosts, but this does not hold true when we look at cultures across the globe. We tend to focus on our own beliefs, but in some cases it may be necessary to look at wider understandings.

Email ThisBlogThis!Share to TwitterShare to FacebookShare to Pinterest
Labels: activity